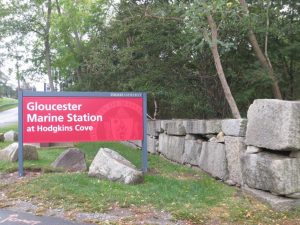 In 2015, The University of Massachusetts, Amherst, had a pressing decision to make about the Gloucester Marine Station: sell it, or reinvest and repurpose the space. The station played host to several biological research programs over four decades since its opening in the 1970s, but was in need of major infrastructure repair and a new funding model if it was to be successful into the future. When a faculty member received an NSF grant to address those issues, UMass decided to move forward with reinventing the station into an extension outpost and cutting-edge research station. With plans for a new seawater system, dock, office spaces, and lab space- the vision of the new Gloucester Marine Station was starting to take shape.

The station sits on the Gulf of Maine, a region experiencing rapid warming and ecosystem change that are causing sea level rise and shifting fish distributions. These challenges particularly threaten Gloucester because of its strong historical links to fishing and the marine environment. The station can play a role in helping to collect data, understand the changes, disseminate the science and help the local community, and greater society, adapt to those changes. Additionally, an existing relationship with the Division of Marine Fisheries, who co-occupy the space with UMass Amherst and have a number of coordinated projects on key coastal species, help further the mission.

“We hope to strengthen this relationship and expand opportunities to other groups to help solve the critical issues facing the communities of the North Shore,” says station director, Dr. Adrian Jordaan.

Dr. Katherine Kahl came on in 2018 as one of 3 new faculty hires to help re-imagine the project. Located full-time in Gloucester, Katie had spent much of the previous year strengthening ties in a community rich with fishing history- a community that in recent decades has been challenged by increasing fishing regulations, climate change, and not surprisingly- conflict between industry and science-based decisions.

“Because you were running the colleague discount, that made the difference for us. Either of us could have come, but that fact that we were both there together has made a huge difference.”

UMass had beneficially reframed the position from a non-tenured research faculty appointment to a 12-month, non-tenured extension appointment- allowing Katie to continue to focus on partnership development and community support, as well as strategic planning- strengths developed in her prior experience working for The Nature Conservancy. 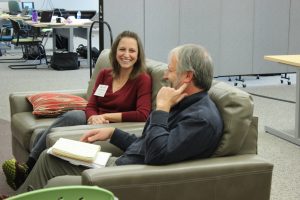 The first task for Adrian, Katie, and the team was to develop a strategic plan for the revitalized marine station. She and Adrian heard about SBI though a contact at UMass and decided that the course sounded valuable to develop skills specific to that planning process.

Katie and Adrian joined us in Fort Collins, Colorado, in October 2018 for SBI. While their focus was on strategic planning, they enjoyed every aspect of the course- from the instructors, to meeting other scientists in similar roles, to the team building aspects. And both agree that having each other there was invaluable. “We were both hearing it, through different lenses, roles, and responsibilities. Having the dedicated time together when we are usually 2.5 hours apart was invaluable.” Katie still finds herself referring to the materials monthly and is finding ways to incorporate aspects of SBI lessons into the environmental leadership course that she now teaches. 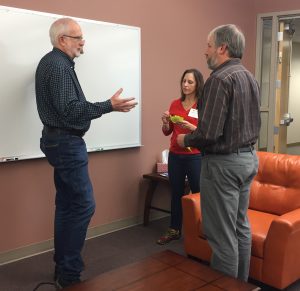 One of the biggest takeaways from the course was the connection made with instructor Bill Michener, recently retired Professor and Director of e-Science Initiatives at the University of New Mexico’s University Libraries and Project Director for Data Observation Network for Earth (DataONE). Bill’s instruction led Katie and Adrian to change direction with the strategic planning process, specifically because Bill encouraged them to engage their stakeholders right from the start. After several consulting calls following the course, they were able to identify 20 impactful stakeholders to attend a planning meeting in December, which Bill facilitated. “One of the great benefits of having Bill involved was that we could all play the role of the participants. Having an impartial facilitator was very important,” reflects Adrian.

“SBI has helped us to be time specific about short- and long-term goals, identify what is urgent, and then focus on long term strategies. It’s also helped us to develop the proper metrics to monitor success,” says Katie.

In the months following the meeting, the team at Gloucester Marine Station was able to draft a complete strategic plan. The stakeholder meeting helped develop the four focus points: sustainable fisheries, climate change, blue economy, and coastal resilience- and developing the right education, research, and engagement programs for those areas. This year, the complete strategic draft will be reviewed by stakeholders, University administration, and directors of other New England marine stations.
As the Gloucester Marine Station continues to take shape, Katie reflects often on her position, the rich community that she is a part of, and how SBI helped her team shape the direction of the program.“It’s a dream job! I have all these people that want to see the marine station succeed. It’s a lot of work, but so rewarding. I would wholeheartedly recommend SBI to anyone who is taking on a similar project. It’s been the difference maker in helping us move forward quickly and efficiently.” Katie is also looking forward to our SBI- offshoot- a focused business planning course coming up this fall! To learn more, visit esa.org/sbi.