Every year, ESA engages in science policy to inform policy affecting the ecological community and fosters support for research and STEM education. ESA broadens its impact by joining with other scientific associations through membership in coalitions.

Every two weeks, a succinct Policy News Update is available to members summarizing relevant federal policy issues. Through the Intersociety Working Group for the past few decades, ESA and the American Institute of Biological Sciences (AIBS) pen the Biological and Ecological Sciences chapter analyzing the President’s FY 2016 budget request to Congress. The entire report is published in print and online by  AAAS. 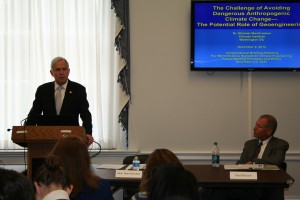 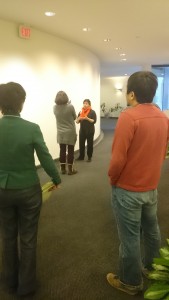 General principles of communication were covered followed by each participant clearly distilling their science into short and clear terms.

Over the past year, ESA leadership weighed-in by signing over thirty letters on a variety of issues and legislation relevant to the ecological community. Our Rapid Response Team members serve as scientific experts that assist leadership to inform policy positions. Here are some examples of policy  letters:

The Biological Ecological Sciences Coalition, co-chaired by ESA and the American Institute of Biological Sciences, brought 5 ESA Graduate Student Policy Award (GSPA) winners and 24 other young scientists to Washington DC. They met with over 60 Congressional offices to discuss their research and advocate for sustained investment in science. Listen to their first- hand accounts in the Ecologist Goes to Washington podcasts. 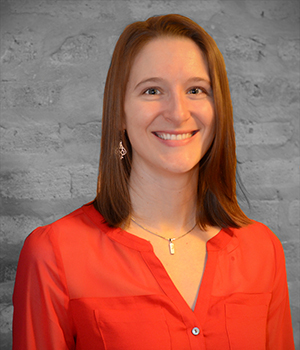 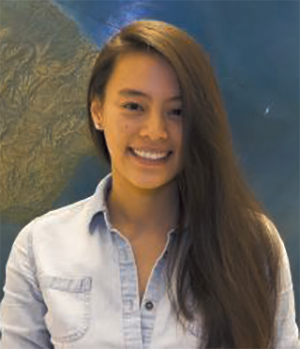 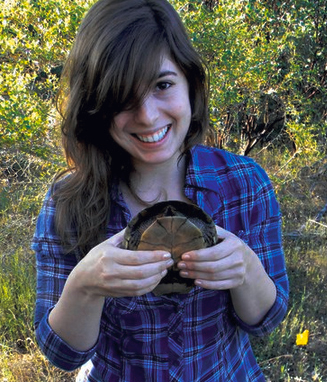 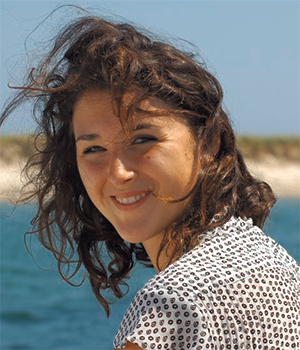 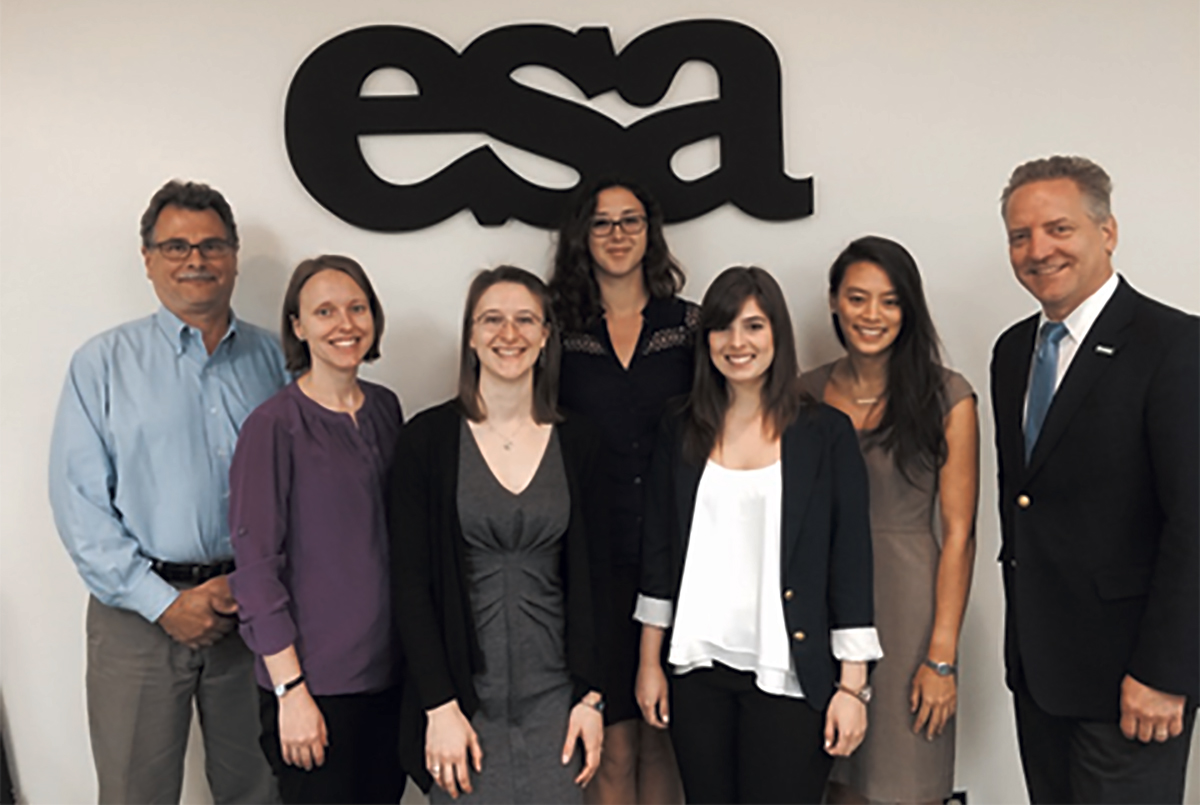 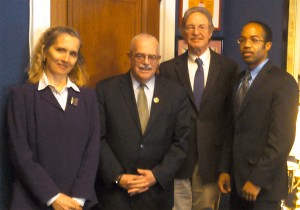 On Jan. 28, a chilly day in Washington DC, ESA members participated in Climate Science Day for the first time. The annual education and outreach event is sponsored by the Climate Science Working Group (CSWG), of which ESA is a member along with other scientific associations. The goal is to advance understanding of climate science research with lawmakers on Capitol Hill.

Teams from various societies met with over 90 House and Senate offices and committee staff. Meetings with freshman Senate and House members were prioritized along with lawmakers who serve on committees with jurisdiction over climate science. President David Inouye and Public Affairs Committee members Bruce Beyers and Alexis Erwin represented the ESA scientific community.

ESA joined 37 organizations to participate in the 21st Annual Exhibition and Reception of the Coalition for National Science Funding (NSF) on Capitol Hill, entitled “Investments in STEM Research and Education: Fueling American Innovation.” ESA Rapid Response Team member Karen Lips, (University of Maryland) spoke to attendees, including members of Congress, about research  on the conservation and ecology of amphibians and reptiles. Her poster’s title “Preventing the Next Amphibian Apocalypse” explained the Batrachochytrium salamandrivorans (B.sal) pathogen and the susceptibility of US amphibian species to its deadly effects. NSF used Storify to cover the reception and highlighted Lips’ research. 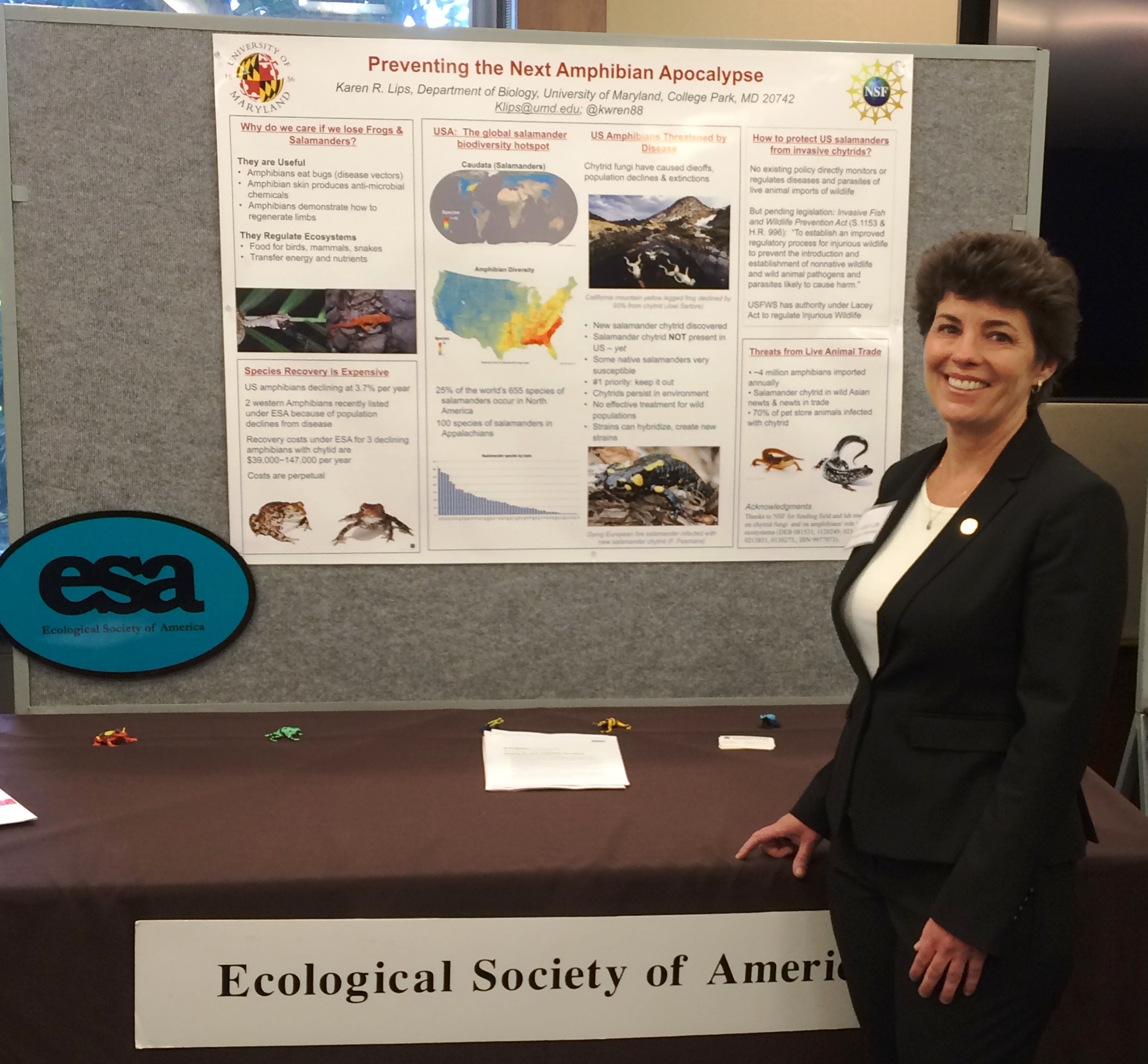 Dr. Lips’ research was funded in part by an NSF Award from the Directorate for Biological Sciences’ Division of Environmental Biology.

ESA works to bring the research presented in our meetings and journals to the attention of journalists through in-house press releases and tipsheets and collaboration with press offices at the home institutions of our authors and members.

The great white shark (Carcharodon carcharias) has a terrifying reputation. Shark attacks, though very rare, loom large in our imaginations, drawing intense media attention when they occur. Recent injuries in North Carolina are putting sharks in the limelight again. But going after sharks à la Jaws is not the best way to protect people in the water, said shark researchers. California scientists found that the risk of white shark attack for individual ocean users in California has fallen strikingly, by over 91 percent, since 1950, in a study to be published online ahead of print in the Ecological Society of America’s journal Frontiers in Ecology and the Environment later this month. [Full Press Release] In recovery from the deadly legacy of DDT, American peregrine falcons (Falco peregrinus anatum) faced new uncertainty in 1992, when biologists proposed to stop rearing young birds in captivity and placing them in wild nests. Tim Wootton and Doug Bell published models that year in ESA’s journal Ecological Applications, projecting population trends for the falcon in California, with and without direct human intervention in the falcons’ reproductive lives. They concluded that the birds would continue to recover without captive rearing, though the population growth rate might slow. Fledgling introductions had bolstered wild falcon numbers and genetic diversity, but survival would ultimately depend on cleaning up lingering DDT contamination to create healthy conditions for wild birds, they argued. This month, they return to their 1992 predictions to see how the American peregrine falcons have fared over the last two decades, with a new report featured on the cover of the September 2014 issue of Ecological Applications. [Full Press Release]

Many of us lavish attention on our front yards, spending precious weekend hours planting, mowing, and manicuring the plants around our homes to look nice for neighbors and strangers passing by. But from the point of view of our feathered friends, our shaggy backyards are far more attractive. So found ecologist Amy Belaire when she surveyed human and avian residents in 25 Cook County neighborhoods in suburban Chicago. She will present her research during the 100thAnnual Meeting of the Ecological Society of America on August 9–14, during a session on Urban Ecosystems that also includes Caroline Dingle’s observations on how birds modulate their songs to be heard over the noise of daily life in Hong Kong, and Kara Belinsky’s exploration of how many trees it takes to make a forest (from a bird’s point of view) in suburban New York. [Full Press Release] Highlights From The October 2014 Issue Of The Ecological Society Of America’s Journal Ecology, Published Online Today. Invasive seaweed shelters native crustacean: On the tidal mudflats of Georgia and South Carolina, the red Japanese seaweed Gracilaria vermiculophylla is gaining a foothold where no native seaweeds live. Only debris and straggles of dead marsh grass used to break the expanse of mud at low tide. Crabs, shrimp, and small crustaceans mob the seaweed in abundance. What makes it so popular? Not its food value. On mudflats near Savannah, Ga., Wright and colleagues found that the tiny native crustaceanGammarus mucronatus (one of the 9,500 species of amphipod, which includes sand fleas) does not eat much of the seaweed. Rather, its attraction is structural. The seaweed protects the small crustaceans from predators at high tide and from the dry heat of the flats at low tide. G. mucronatuswas up to 100 times as abundant on seaweed invaded mudflats. Mature forests store nitrogen in soils: Ecologists working in central Pennsylvania forests have found that forest top soils capture and stabilize the powerful fertilizer nitrogen quickly, within days, but release it slowly, over years to decades. The discrepancy in rates means that nitrogen can build up in soils. Forests may be providing an unappreciated service by storing excess nitrogen emitted by modern agriculture, industry, and transport before it can cause problems for our waterways. [Full Press Release] The tall, mature trees of a late-succession forest (right) stand next to the young regrowth of a clear-cut forest in central Pennsylvania. The deeper volume of organic matter on the floor of a mature forest can capture more of the nutrient nitrogen when it enters the forest than the clear-cut can. Credit, David Lewis.

When ecologists gather in Baltimore, Md., this August for the 100th Annual Meeting of the Ecological Society of America, special attention will fall on the local Chesapeake Bay watershed, with field trips and research presentations exploring its rich wildlife and social history. At symposia, poster exhibits, and site visits, ecologists will have opportunities to discuss the latest research and experiences working with stakeholders in the region to improve the health of the nation’s largest estuary. [Full Press Release] A true color composite image of Chesapeake Bay, created from Provisional Surface Reflectance data collected by the USGS satellite Landsat 8 in the fall of 2014. Sediment appears light blue or green, suspended in the water along the coast and in the rivers of the Chesapeake watershed. Baltimore, Md., and Washington, D.C., and the I95 corridor are bright grey stars to the left of the Bay. Credit, US Geological Survey.

Nutrient Solutions For Agriculture: Engaging Rural Residents And Farmers: Cooking chicken manure into charcoal, or biochar, can turn a pollution problem into a potential farming resource. Biochar is an organic fertilizer that retains nitrogen in soil longer than inorganic nitrogen fertilizers and also captures the carbon in the manure in a stable form, returning it to the soil. Revitalizing Urban Neighborhoods: Simple urban improvements like replacing the concrete of an empty lot with greenery have the potential to improve the health and happiness of neighborhood residents as well as the quality of the water draining from these urban surfaces, and ultimately into the bay.

With a following that has grown to over 20,000, @esa_org enjoys a lively presence on Twitter. We follow the Twitter feeds of more than 1,000 ecological scientists, as well as educators, journalists, and policy makers, to keep abreast of news and trends in the community. Filters and Altmetrics tools help us track the ways in which ESA publications are shared online.

Return of the Natural Historian: #IAmANaturalist

Last Fall, Kirsten Rowell challenged ecologists on ESA’s news blog, Ecotone, to declare their naturalist identities during the Natural History Section’s #IAmANaturalist twitter campaign. The community obliged, coming through with humor, awe, and humility—sometimes fishy, sometimes muddy, and always with great style, and the hashtag is still going strong. Check out the blog links on Ecotone and sample the twitter action in ESA’s collection on storify or Scientific American‘s sampling curated by Hannah Waters.

#IAmANaturalist not only b/c nature is wonderful, but also b/c context is crucial for understanding our findings! pic.twitter.com/cPAwT3nkln

#Iamanaturalist because I love getting sea hare ink on my arms pic.twitter.com/BQiH0jAyle

#IAmANaturalist in all types of human-dominated landscapes, because nature is and ought to be everywhere around us. pic.twitter.com/pUxQR0vw60

#IAmANaturalist, which occasionally calls for the use of a machete #whoknew #lovemyjob pic.twitter.com/BoRq9RyuOE

Things I learned because #IAmANaturalist: Bring duct tape. Can save the day. Sadly, it can't fix ecological problems pic.twitter.com/8yTBpTXFvB

Voices of the Community

Bethann Garramon Merkle urged meeting attendees to sketch their notes at #ESA100 in a guest post for Ecotone. Drawing by B.G. Merkle.

This year, ESA’s news blog, Ecotone, hosted guest commentary from members on SEEDS activities, the papal encyclical on the environment, and in remembrance of a beloved colleague, among other topics. Check out their thoughts in the index of Ecotone’s guest commentary.